Build It. Break It. Fix It.

For Boston Dynamics engineers and technicians, robot crashes are all part of the learning process. Breaks, bumps, and failures highlight exactly what needs to be improved and give the team an opportunity to build a better robot. 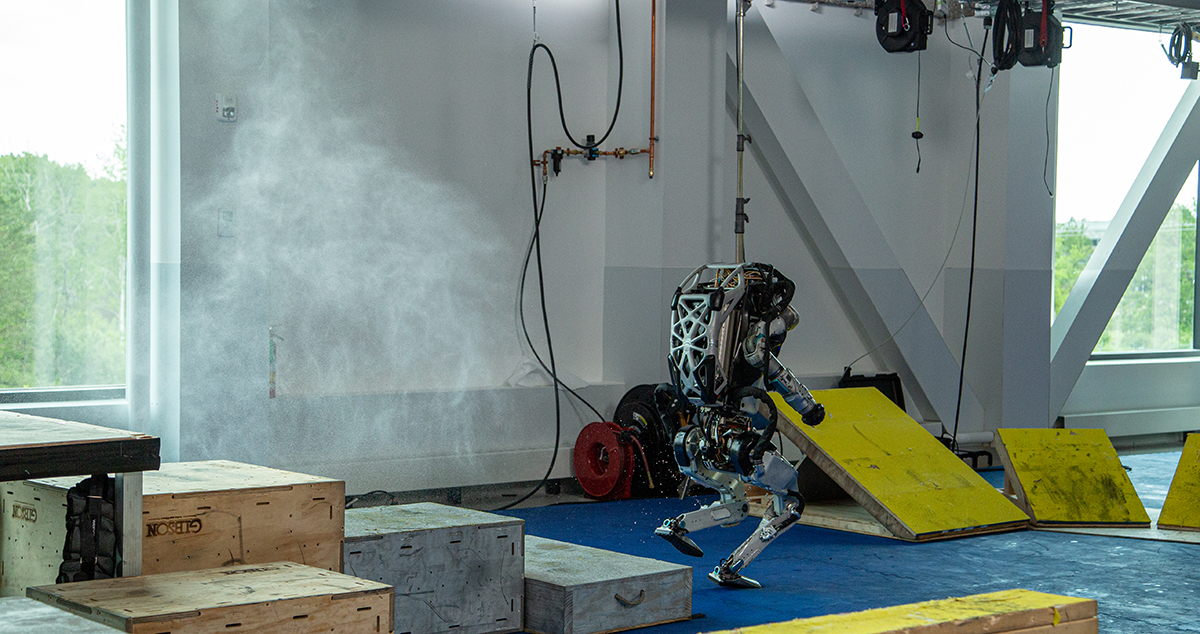 Atlas jogs up to the embanked yellow plywood panels, bouncing with ease from one to the next until the humanoid robot has made its way up to a box that sits at about waist level. Sensing the gap in front of it, Atlas pauses, plants its feet, and broad jumps across to a table on the other side.

It sticks the landing. By all appearances, Atlas is cruising. But then, as the robot descends the three stairs back to the floor, a geyser of pink hydraulic fluid erupts from its left knee. The robot gets a few more staggered steps in as the oil gushes into the air, and then collapses in a heap.

A miniature crane is brought out, while someone from the operations team that builds and maintains the test courses begins wiping the (vegetable-based, nontoxic) fluid from the interlocking blue foam floor tiles. The robot is hoisted up and moved away from the parkour course to the area where the Atlas technicians work. To the untrained eye, Atlas’s tumble may have appeared catastrophic, but Bill Washburn, a senior technician on the Atlas team, knows what to do.

“Very minor,” Washburn says, tinkering with the robot, which dangles from its mini-crane over an oil pan in the lab. “I’ll probably have it done in half an hour.”

Something about a humanoid robot crashing to the ground tends to cause a pang of sympathy in onlookers. And even many roboticists try to keep their robots from falling, simply because it is time-consuming and expensive to repair them when they break.

But at Boston Dynamics, crashes and falls are an integral part of the development process. By pushing Atlas to (and sometimes beyond) its limits, the team continually learns more about its capabilities and how to improve them. But this approach would not be possible without a team of highly specialized technicians. When something on Atlas breaks, Boston Dynamics can’t send the robot out for repairs; the company must rely on the know-how of people in the building to get a broken robot back on its feet. “Build it, break it, fix it” has become a sort of rallying cry within the company walls, a shorthand for company values like “solve hard problems” and “revel in robotics”.

The technicians on the Atlas team bring an eclectic set of backgrounds and training with them into the shop. Washburn, who studied multimedia art and photography in college, worked in motorsports for twelve years before joining the Atlas team. Electrical engineering technician Crystal Kemp, who focuses her efforts on Atlas’s batteries and valves, has a background in aerospace welding. And Tom Stevens, the team’s other electrical engineering technician, specializes in the sensors and electrical components that make up what he calls the robot’s “brain” and “nervous system.”

The video shoot, Kemp says, is an “all-hands-on-deck” day. “We’re pretty much on standby,” she says. “We try to get some routine projects done, but when something breaks, we jump in and get it fixed as quickly as possible.”

The lead-up to a filming day can have dramatic twists and turns, as the team prepares to showcase the results of a prolonged research sprint – the culmination of the work the Atlas team has done over the past several months.

Crashes are an expected, and welcomed, part of the process. While two of the four Atlas robots are designated as “demo” robots, kept as shiny and clean as possible, the other two are the “lab” robots, used to develop and test new behaviors. These robots take the bulk of the falls – and have the battle scars to prove it. On one of the lab robots, a deep, five-inch scratch runs from its midsection up to roughly where the sternum would be on a person. There’s a sizable gash in the plastic covering the robot’s left leg, and the paint is chipped all over the robot’s body. Its chest, which once said “Boston Dynamics,” now reads “Boto Dynmcs.”

“For an intensive video like this,” Kemp explains, “we use the lab robots.”

“We’re always very busy trying to research and pull off brand new behaviors,” Stevens says. “There’s always a moment where we have to decide, ‘Okay, nobody touch the robots because we really need them to work tomorrow.’ It’s a balancing act, and it usually means doing a lot of last-minute fixes – sometimes catastrophic crashes and breaks that create a little bit of stress for us.”

‘A Constant Stream of Fixes’

Atlas has a small – but significant – chance of failure for each of the various stages of the parkour course. The most difficult move isn’t the broad jump, or even the coordinated backflips at the end of the routine. Rather, the vault – in which one robot plants its arm on and then jumps over a waist-high beam – is the most precarious move.

In the morning, Washburn says there are roughly even odds that both Atlas lab robots will make it through the day without a repair. If Atlas does need to come offline, Washburn predicts, the most likely culprit will be something internal to the legs – the connecting bolts that hold the robot’s actuator together, perhaps. Such a repair job would likely take around four hours, in which case the team has one of the demo robots on standby to prevent a lengthy production shutdown.

Most of these mechanical component failures are from pressures that far surpass the original design parameters. Instead of redesigning the robots, the team pushes the hydraulic components as far as they can go. “What’s been challenging with this particular video is that we need both lab robots at the same time,” Washburn says. “Usually we have one robot running, and the second one is always a backup. It’s rare that they’re running together at the same time. So it’s been a constant stream of fixes.”

Twice in the first four runs through the course, one of the robots takes a tumble on the vault. And although Atlas makes something of a racket when its 190-pound frame hits the ground, neither crash is serious enough to take the robot out of commission. It is on its fifth trip through the course, when Atlas appears to be running along with ease, that the robot starts spraying pink fluid.

And now, it is time for the technicians to step in and work their magic.

Back Up and Running

Washburn strips the rubber casings off of three metal hoses on Atlas’s left leg. Each of the hoses is rated for a pressure of 3,000 pounds per square inch (PSI), but the actual burst pressure, Washburn says, is closer to 10,000 PSI. Bringing the three hoses to a workbench for inspection, Washburn immediately identifies the culprit. The braided Teflon of one of the hoses is dented, possibly the result of an earlier fall. As a precaution, Washburn checks the other two hoses, but they’re both fine. He’s never seen more than one fail at a time.

It only takes Washburn a few minutes to cut a new length of hose, outfit it with custom titanium fittings, and reattach all three hoses to Atlas. Before long, the robot is back out on the course, ready to earn itself a few more dings and scratches. Despite some wobbles, the robots manage to keep their footing in the next several runs, until they eventually perform a near-perfect version that will later be used in the video’s final cut. After each run, the Atlas engineers study the robots’ logs, find areas for improvement, and tinker with the code.

Near the end of the day, Washburn gives one of the robots a cursory inspection after another nearly flawless run through the course. “I’m pretty impressed with how everything has progressed today,” he admits.

As he continues tinkering, the engineers and film crew gather around a monitor to watch a slow-motion replay of one of the earlier crashes. “That’s awesome,” someone says. “Here it goes,” someone else chimes in, as the footage plays frame-by-frame. “Boom!”

Far from being frustrated, controls engineer Sean Mason says, “For this team, watching the robot fail is one of the best parts. Every failure is seen as a chance to make the robot better and more robust.”